There’s no such thing as bad weather; there’s only bad gear.

Unless, of course, you’re getting old: you feel cold more no matter what you’re wearing.  But there are other defences against the snowy blast. The “seven-day forecast” is one. Another is Vitamin D, especially if it’s cold and dark. Here’s a third: Yuma, Arizona, which is the only place on earth that has more than 4,000 hours of sunshine a year.

So, to brighten up your weekend, here’s the week’s Omnium-Gatherum blog.

1. Woman Interrupted. Men dominate 75% of the conversations in conferences and interrupt women 23% more than they (we) interrupt other men. Many of them (us) aren’t even aware they (we) do this. Since knowing you’re behaving badly is the first step in not behaving badly, men (we) should applaud the creation of the “Manterruption App” that detects manterruptions in daily conversations, as they happen.

2. Low-tech body warmers. Don’t you go fallin’ for those heated jackets. “Imagine a personal heating system that works indoors as well as outdoors, can be taken anywhere, requires little energy, and is independent of any infrastructure. It exists – and is hundreds of years old.”

3. Liar, Liar, pants on fire. In 2010, we spent an average of 20 minutes per day on our smartphones. Like to guess how much we spend today? The inestimable Scott Galloway reveals the sordid truth.

4. But could he do that — in Toronto — this week? Watch the tightest reverse parallel park of all time.

5. Can you hear me now? Last October, the Toronto International Festival of Authors presented 11 of the world’s most distinctive writers in a series that speaks for marginalized people to be heard. You can see and hear the likes of Maisy Card, Genki Ferguson, Laird Hunt, Maki Kashimada, Lina Meruane, Shani Mootoo, Scholastique Mukasonga, Louisa Onomé, Max Porter and Ashley Spires. They’re all yours, free, as an ebook and an audiobook from Kobo.

6. Bears living the life. First, polar bears, then a strange encounter with a huge brown bear.

7. $3 billion to extend your life.  Jeff Bezos and Yuri Milner (a founder  of the Breakthrough Prize) are funding a biotech startup, Altos Labs,  that’s “pursuing biological reprogramming technology.” Altos insists their goal is to extend lives, not to cheat death, and that their focus is ‘healthspan’, not lifespan. Its board is packed with Nobel Prize winners. This may be a moonshot worth taking.

8. Helping police in their enquiries. If you’re a fan of the British police procedural, Line of Duty, you know the interrogation scenes are masterpieces. Here’s a video of the police grilling their toughest suspect.

9. Every place you’ve been, on one custom map.  Andrew Alfred-Duggan has been making LifeMaps for his clients for years. So rather than a map of Paris, and a map of Fogo and a map of Moscow, you can have one map where the Champs Elysee runs into Joe Batt’s Arm, which stops at the Kremlin. Very cool.

10. They don’t make trailers like this any more. Nor do they make movies like Singin’ in the Rain. Back in 1952, the movie’s trailer was also a quick history of the shift from silents to talkies.

You want to go to the Fogo Island Inn someday. Come with us. 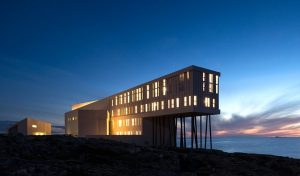 By now, you know people who’ve been there; you’ve heard their rapturous recounting.