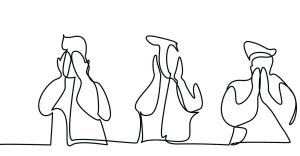 Victory may have a thousand hand-maidens, but so does complicity.

This podcast tells how to avoid turning your gaze when others’ bad behaviour comes into view. But while a big part of complicity is often silence – “Nothing to see here, folks” – explicit badness can never seem to shut up and sit down. See FIFA President Gianni Infantino’s “meandering” one-hour take-down of Western countries for daring to criticize World Cup host-nation Qatar; and Donald Trump’s “rambling” one-hour speech announcing his run for President in 2024.

But the best examples of this growing art form are the filmed tributes to mendacity on a national scale, like this with David Beckham as part of his £150 million sponsorship deal touting Qatar.

Meanwhile, here is this week’s Omnium-Gatherum…