Jack Diamond died last Sunday, one week short of his 90th birthday, and proof that living an engaged life often means a long one. He hated the word “starchitect”, but he was one because he had the will and the vision and the ego to create some of the great concert halls and opera houses in the world today. These are not run by people who lack willpower themselves, as this documentary (Password: Master) on his creation of the Mariinsky II Theatre in St. Petersburg, Russia, reveals.

1. This person does not exist. It’s a website of ‘fake person photos’ generated by a computer. They look real to me, but I’m still trying to figure out what fake news is.

2. Who do we spend our time with? It changes as we age, until in old age most of us spend most of our time alone. This chart uses American data, but I don’t see how Canada would be much different. By the time you reach 65, you’ll likely spend seven and a half hours a day on your own. So much for the life-enhancing power of social connection.

Speaking of aging, what if it weren’t our common fate but a curable disease? Harvard’s David Sinclair says maybe age is reversible.

3. Calling strikes. Umpires may go the way of the dodo bird soon. Major League Baseball is testing an automated strike zone system to start in the 2024 season. If you subscribe to nytimes.com, you can see how good a computer umpire you’d be.

4. The very long list of common misconceptions. One of Wikipedia’s most valuable entries, it corrects much of what we believe is true. Did you know there are no known cases of children having been killed or seriously injured by poisoned candy or fruit given to them by strangers at Halloween? Or that fortune cookies are not found in restaurants in China? Or that you don’t have to wait 24 hours before filing a missing person’s report?

5. What’s our walkability score? Here’s an app that shows how walkable (or bikeable or public-transitable) your community is – from “Walkers’ Paradise” – daily errands do not require a car, to “Care Dependent” – almost all errands depend on a car.

6. Boom! It flies at twice the speed of today’s fastest commercial jets. It’s coming in 2025 and American Airlines has already put the first money down on the new generation of supersonic jets. That’s less than a thousand days from now.

7. The fast life. Why can’t we do this stuff as fast, let alone at all?

8. Inside the belly of the beast. The Washington Post hails the new Geffen Hall at Lincoln Center “like being inside the body of an instrument”. Now here’s a film  on what it’s like to crawl inside an instrument.

9. Can you teach me your favorite dance move? A guy goes up to people on the street and asks this question. Here’s their response.

10. Everything old is new again. That song, by Bob Fosse in the 1979 movie All That Jazz, epitomizes the treasures unlocked by googling “video [title of favourite music here]”. Here are my two latest faves: Muddy Waters and The Rolling Stones together in Baby Please Don’t Go, at the Checkerboard Lounge in Chicago in 1981. And this month’s Oper Frankfurt rendition of Mozart’s Magic Flute.

Have breakfast with one of the most creative people in the world. 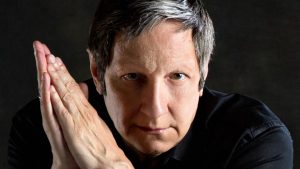 And now, Robert Lepage will reveal where he’s headed next. One place is with ShowOne who earlier this year brought Toronto his stunning VR production of The Library at Night.

Please pass this invitation on to like-minded friends and family.