Fit for a Maharaja: Not Your Traditional Adventure Through India

Everyone who travels to India returns to say a variation of this: “I am inside the most opulent palace in the world—and outside its gates, the most pitiful beggars are pleading for enough rupees to keep them alive.” In other words, the contrasts between wretched wealth and clutching poverty are so inescapable in India that lots of us decide to escape by not visiting it at all.

That was true for me; India would bob up and down on my bucket list of ‘must-see places’, but never rise to the top. Until, that is, my wife Dr. Jean Marmareo and I went on a safari with friends to Africa last year with the outfitter, Micato Safaris.

Micato is no ordinary ‘amazing outfitter’. They’re the nine-time Travel & Leisure Winner of the World’s Best Safari Outfitter. They also succeeded in turning the eight of us take-charge control-freaks into compliant children, happy to be led around from one astounding safari experience to another. When we learned Micato offers discoveries to India as well, we all signed on.

Micato isn’t cheap. Our 10-day bespoke private trip cost $13,560 each. But Iwouldn’t regret a single US dollar of it. When my wife scanned the final itinerary a few weeks before we left Toronto for Delhi, she said: “This isn’t a tour of India; it’s a tour of the great hotels of India.”

It was that, to be sure. In Agra, we checked in to the Oberoi Amarvilas, a modern palace with the clearest, closest view of the Taj Mahal. In Ranthambhore National Park, where we spent two days tiger-sighting, we relaxed at the Oberoi Vanyavilas, whose tented villas put even the most luxurious tented camp in the shade. And at Delhi Airport, where we camped out for a few hours before our midnight flights home, we checked into day rooms and had divine dinner at the Oberoi Gurgaon, surely the finest airport hotel anywhere.

If you sense a common word here, yes, Oberoi may be an unfamiliar name to many of us. But it was founded in 1934 and is still a family business. Last year, it was chosen “The World’s Best Hotel Brand”. They do it by completely redefining the meaning of hospitality. And while long-established chains like Four Seasons obsess about service, Oberoi brings what the Western luxury chains cannot: armies of people eager to do your every bidding. Insanely eager at times. A butler on every floor, a flutter of check-in staff ready to guide you to your room, a waiter who asks what you’d like for lunch today and reminds you what you had at lunch yesterday. 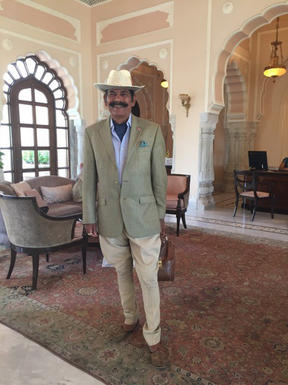 But luxury hotels on their own rarely make a memorable vacation, and for us the difference was Micato’s astounding Tour Director, Hem Singh. He’s been described as the most photographed guide in India. Little wonder: he looks right out of Central Casting as the infinitely cultured (and moustachioed) Fixer-of-Everything from the days of the Raj—complete with an ascot and jodhpurs.

He’s better than that: he instinctively gauged our curiosity, brainpower and jet lag finely-tuning his well-told stories to just what we needed. I mentioned in passing that I was a Winston Churchill fan, so every day he made sure to tell me a story that linked India and Churchill in ways I had never imagined. Hem Singh loves his job, is incredibly proud of it and that pride is shared by everyone he comes in touch with.

There are people who “know everyone.” With Hem Singh, everyone respects him and even reveres him too.

Micato billed our trip “The Soul of India.” I thought that was just a marketing line, until we were flown beyond where most first-timers to India find themselves—in the Golden Triangle of Delhi, Agra and Jaiphur.

Varanasi is just a 90-minute flight east from Delhi, but it’s a different universe from the one we’d spent nine days in. It’s the spiritual capital of India, where every day thousands of faithful Hindus bathe themselves and their clothes in the Ganges, and dozens of families cremate their loved ones on open fires, then throw their ashes into the Ganges. Luxury gets short shrift here where the crowds for the night-time religious services number in the tens of thousands, a ceremony you see from your boat on the Ganges where there are also thousands of people watching.

And now that I’ve had a taste of them together, yes, I want to go back.